This year was an interesting growing season for wine producers in the Willamette Valley of Oregon. As wineries continue to adjust to the new normal of COVID and appointment only reservations becomes the norm, the region experienced a heat dome this summer resulting in record temperatures hovering around 115 degrees for several days. Quick and decisive decision making is becoming a necessity for grape growers. With harvest happening usually in the September to October time period, growers are always potentially faced with early rain, and now the threat of wildfires, that can quickly determine or alter how a grower approaches a harvest.

Within the Willamette Valley AVA, there are many nested AVAs within the region that showcase the uniqueness in elevation, temperature and soil types to name a few factors that make each sub-region unique across the 3.4 million acres that comprises the area. Willamette Valley very much remains largely small producers and family farmers who are inspired by the land to create distinct high-quality wines. Included are a few of those vintners across the different sub-regions.

For Dave and Sara Specter, winemaking started off thousands of miles away in Cincinnati, Ohio as a hobby. Spending a vacation in the Willamette Valley, the couple fell in love with the region. Working as a tax attorney for a decade and traveling a ton, Dave was looking for something different. He started taking classes in wine and working in a cellar locally. Eventually the Specters would purchase a dead Christmas tree farm in Newberg.

Located in the Chehalem Mountains AVA at the northernmost end of the Willamette Valley, bordering high mountain peaks, deep valleys and challenging pockets of terrain, Bells Up Winery consists of nine acres of planted grapes. The parcels of property in the Chehalem Mountains AVA are usually smaller in size than those found further south in the Willamette Valley where the vineyards generally tend toward larger acreage.

“I sometimes think the word microclimate was developed to describe this AVA,” said Dave. “There are lots of geographic nooks and crannies throughout the mountain ranges that impact different vineyards — and sometimes different blocks within the same vineyard — in a broad assortment of ways.”

In the cellar, Dave strives for balance and versatility achieving optimal flavor-acid structure in each bottle. The white wines tend to be fuller-bodied while the reds are more elegant and restrained. With regards to each of his Pinot Noirs, Dave composes a blend of Pinot Noir clones to create a distinct mouthfeel to clearly distinguish each one from the other.

The Specters also are one of two wineries in Oregon that grow and make a Seyval Blanc, a white wine primarily grown in England and northern parts of the east coast. “We believed it would grow well here, and after several harvests that resulted in some beautiful wines, we’re happy to be proven right,” said Dave.

This year’s harvest was tough as virtually every single pick had some kind of challenge from weather conditions to equipment issues. “All in all, the fruit came in great, albeit more than estimated. Our own vineyard’s oldest two blocks produced 50% more than we anticipated,” said Dave.

For Steve Lutz, the journey began in the 1980’s, when after a voluntary layoff from his corporate job, he packed up his VW bug and moved to the Napa Valley. During his time there, he met his wife Karen and got some valuable experience in the wine business working at wineries like Inglenook, Beringer Vineyards and Merryvale Winery. While at Merryvale Winery, Steve had the opportunity to work with Pinot Noir from Carneros and fell in love with the grape.

After living in England for a period of time, Steve knew he wanted to follow his passions and start a winery in Oregon. He had gone to college there and was familiar with the area. In 2000, he found a property to grow Pinot Noir, situated on 21 acres in the Yamhill-Carlton District AVA.

Located north of McMinnville in the Northern Willamette Valley, the land rises to the surrounding towns of Carlton and Yamhill while the low ridges surround the towns in a horseshoe shape forming the Yamhill-Carlton District AVA. The soil composition is old ocean floor producing very black-fruited Pinot Noirs with a lot of earthy and chocolate aromatics. The wines typically tend to be driven by tannin as the shallow soils produce small, thick skinned berries. 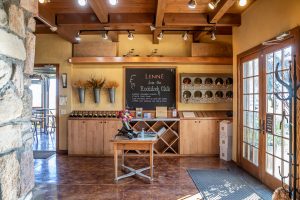 Steve views Pinot Noir as truly reflecting its terroir more than most varieties or at least the characteristics are more pronounced because of the structure of the grape. “Our Pinot Noir has loads of fine grained tannins because of our difficult soil and the wines all have a mocha aromatic, which is a terroir aromatic signature at Lenné,” said Steve.

The early heat in the summer and cooler than average weather in August provided for a very even ripening for this year’s harvest. From a fruit perspective, it was one of the largest crops the winery has ever produced, which was not surprising as the previous had some of the lowest yields seen to date.

Wayne Bailey always had an appreciation for the agriculture business as it was part of childhood growing up as a farm boy in Iowa. He began his career consulting in the retail side of the food and beverage industry. As luck would have it, he got the opportunity to consult in Burgundy for two years. Wayne’s time in France was a major inflection point as he fell in love with the old world methods of winemaking where crafting a wine that reflects a time and place was an art form. Wayne knew he wanted to make cool climate Pinot Noir and Chardonnay in the United States, in that Burgundian style, and the Willamette Valley fit that mold.

Eventually, he found a property in the McMinnville AVA establishing his winery, Youngberg Hill. This sub-region offered higher elevation and proximity to the Pacific Coast. The McMinniville AVA soils are distinctly shallow for growing grapes while the planted slopes are protected by the Coast Range mountains typically seeing less rainfall than areas to the east.

Wayne’s approach to winemaking is a low intervention style, letting the vineyard reflect the profile of the wines as each vintage is truly unique. “Our Pinot Noirs tend to be more intense, with more depth and earthier, saviory characteristics,” said Wayne. They also tend to show more intensity with a bolder structure showcasing blue and black fruit within the flavor profile.

This year’s cooler September harvest provided for grapes that were of good to excellent quality however the overall yields were a bit lower.

The expectation for 2022 is that pent up demand from the pandemic will continue to drive customers in large droves to the Willamette Valley seeking world-class wines and a customer experience to match that. As guests flock to the region, they can expect the same level of intimacy as small producers open up their lives and welcome tasters in as though they were members of the family. Amongst each other, a majority of the wineries cultivate positive relationships with each other and are willing to offer equipment or advice when someone else is in need.

“We are mostly family-owned and operated businesses that depend on growing grapes and making wines as our primary income and livelihood,” said Wayne. “As such, we work together and support each other as farmers did in the 1960’s in the Midwest.”

2019 Bells Up Winery Candide Reserve– sourced at 800 feet in elevation, this wine showcases bright acidity with flavors of cherry and raspberry followed up by a smooth finish.

2018 Youngberg Hill J-Block Pinot Noir– Dark cherry on the nose with flavors of red berries and stone fruit. Youthful, graceful and balanced from top to bottom.

2018 Lenné Estate South Slope Select Pinot Noir– ruby red in color with a touch of chocolate on the nose. This wine has flavors of dark cherry, strawberry and blueberry followed up by a long finish.

2019 Youngberg Hill Aspen Chardonnay– named in honor of the vintner’s daughter, this wine displays apple aromatics with flavors of pear, lemon and just a touch of oak.

Located out of the Sierra Foothills of California, Joe Campbell provides color commentary as well as insight within the wine industry both from the lifestyle consumer and business segments of the industry. He can be reached via email at joe at winebulletin.net