By Joe CampbellPublished On: December 7, 2021

Growing up in Sandusky Ohio, Joe Juniper always had a love for plants. While his mom was working two jobs to make a living, Joe would be outside bonding with vegetation. At the age of 13, he started working in a vineyard at a medium sized winery biking over there as time allowed for it. Over the next few years, he continued increasing his responsibilities working in the cellar and learning the business. 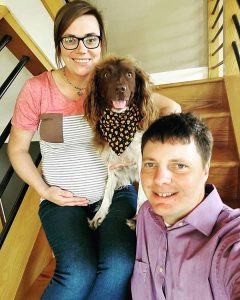 Around the same time, Joe met his now wife, Kristi, who also shared a passion for wine. At the young age of 22, they both became operating partners at Vermilion Valley Vineyards, a venture founded in 2007 by several local area professionals. Fast forward four years later, the partners were all looking to exit the winery. The Junipers would collaborate with the owners of the prior vineyard Joe worked at resulting in an organizational merger resulting in over 100 planted acres and 25 additional acres they consulted on while maintaining the Vermilion Valley Vineyards name.

Vermilion Valley Vineyards today consists of four different vineyard sites all within close relative proximity to Lake Erie spanning across a 40 mile distance east to west. With regards to the weather, the vineyards can see a huge variance in both temperature and precipitation resulting in a diversity in wines produced. Understanding, they will not be producing perfect wine every year due to the climate extremes in North Central Ohio, the Junipers hope four to five of the wines annually are out of the park.

A vast majority of the annual precipitation occurs during the growing season. From April to October, they typically see 35 to 40 inches of rainfall mostly during the beginning and end of the seasons. Unlike dry Northern California, a risk management approach needs to be applied. Decisions need to be made as to when to pick based on weather forecasts as well as how the fruit chemistry could be impacted by a late season rain around harvest.

With regards to the winemaking, Joe and Kristi oversee this endeavor together as co-winemakers as Kristi’s great palate compliments Joe’s more technical background. Their white wines are built in a reductive as opposed to an oxidative format, sacrificing aromatics to gain complexity and depth.

Vermilion Valley Vineyards red wine production is usually hot and dangerous as Joe describes it. “We want as much as possible out of our reds and we achieve this with hot fermentations over 100 degrees, for certain varieties. Our goal is to get as much over extraction as possible, meanwhile blowing off a bit of alcohol. We then reverse the extraction to our desire by utilizing extended maceration to polymerize unwanted tannin and harshness.”

According to Joe, Pinot Gris and Cabernet Franc are by far the most consistent locally produced wines in terms of quality. Though Pinot Gris can be boring, it is incredibly flexible and will take to any vintage. With a proper cellar protocol and an experienced winemaker, it can level the playing fields between the worst vintage and the best vintage with similar results.

“Cabernet Franc in the Loire Chinon style can be a bit more difficult to keep consistent unless you keep tabs on current weather events and their impact on the crop,” said Joe. “We intentionally set 50% more fruit than desired in an average year. From there we dial in our crop load and leaf pull based entirely on vintage projections.” 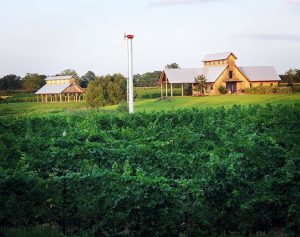 Ohio, at large, has struggled with establishing a regional wine identity. Many of the wineries are importing cheap grapes in large quantities from the west coast. “Oftentimes, finished bulk wine from the Central Valley as well as Washington state make up a large portion of the wine produced within the state of Ohio,” said Joe. “This has created an authenticity crisis for Ohio wine especially for the few 100% estate grown operations like Vermilion Valley Vineyards. This trend continues to swing in the wrong direction as we continue to add wineries at the rate of 50 per year to our state. Until proper legislation is passed, or customers magically become concerned, the situation likely isn’t going to improve.”

To put that into perspective, Ohio has about 370 wineries currently and only 900 acres of grapes planted. If you take out the five largest vineyards in the state, you are left with nearly a one winery to one-acre ratio, which is not sustainable for a long term viticulture growth strategy within the state.

For Vermilion Valley Vineyards, it comes down to their diverse clientele. On any given summer afternoon, you expect to see an equal number of Fords, Mercedes, and Harley Davidsons parked in the driveway. “Though our wine offerings are primarily dry, with our forward ripening region, we are able to produce several late-harvest wines with some residual sweetness along with a traditional style Moscato. This allows us to accommodate even the most casual wine drinker,” said Joe.