For Stu and Charlie Smith, making wine on top of Spring Mountain west of Saint Helena in the northern Napa Valley has been a way of life for five decades. The Smith-Madrone Vineyards property is a mix of vineyard, mountain and forest. Black bears, cougars and red-tailed hawks share the landscape. For the Smiths it is a testament to their love of the outdoors as well as the realization that the best place to grow grapes is in the mountains. There is a characteristic structure and backbone that comes at these high elevations. The vines have to struggle and work hard creating complexity and nuance. Winemakers can make that terroir go away, but mountain fruit retains a freshness and a distinct mouthfeel that is differentiated from the Napa Valley floor. 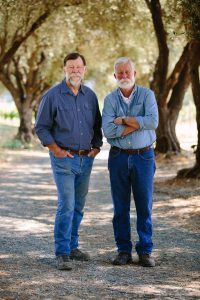 For the Smiths, it has been a hard road to climb. Growing up in Southern California, they came from humble beginnings and were completely undercapitalized from the onset of starting Smith-Madrone. The whole property was forested. There is no easy way of doing things up on Spring Mountain. Custom crush facilities did not exist when they started– everything was brick and mortar.

To survive you had to sell your wine. The drive was to make the greatest wine you could, not necessarily make a lot of money, but there was no sitting on inventory. This was your living– this was your life.

From the early 1970’s, they slowly evolved the brand, but kept their focus on making a handful of high quality wines while maintaining reasonable price points that by Napa Valley standards are relatively affordable. They have the Cook’s Flat Reserve, which is their high end Cabernet Sauvignon that retails at the winery for $225 a bottle. They also have their wines that can be opened on a Tuesday night as well and enjoyed with a casual meal. “There are people who have been buying our wines for years and years at $10-12 a bottle. We don’t want to lose those people,” said Stu.

Riesling has been a hallmark of their offerings. Stu equates it to the Greek myth of Sisyphus rolling the rock up the hill. A persistent struggle against the absurdity of life or in this case getting people to love the more esoteric Riesling. They have had to go through several generations to build an enthusiastic momentum. The two major buyers now are young people and sommeliers. “It’s the only varietal that gives the essence of the grape itself. We bring it right in from the vineyard and put it in stainless steel,” said Stu. “When you get it from the same vineyard for the last 50 years it is the purest essence of what a grape can be.”

The accelerated growth within the Napa Valley at large has not been without its challenges. From Stu’s vantage point, Napa Valley started to change due to the rising popularity of Auction Napa Valley. What started out as a small fundraising event with a goal of raising $50,000 quickly and exponentially ballooned into grand displays of decadence. In the 1980s, the super wealthy started flying in on their jets and bid on lavish experiences and in some cases spent hundreds of thousands of dollars on wine bottle purchases. For many in the community, watching these Gatsby-esque displays was a turnoff. On the plus side, a lot of money was raised for charity, but it was offset by opulence and lavish spending that is still on display today within the Napa Valley, and fair or unfair, has become a key focal point of the region.

When the Smiths started in the industry, there was this neighborly collaboration that is more challenging to come by today with Napa Valley’s accelerated growth. If Bob Trinchero needed to borrow a wrench, he would call up Louis Martini who would in turn tell him you know where to find it. With the new money coming in and starting up brands, there is less of that camaraderie. The other challenge is that many wineries are not focused on generating a profit. For some newcomers it is a novelty act, which long-term, is not economically sustainable. “The winery should be feeding you– not you feeding the winery,” said Stu. 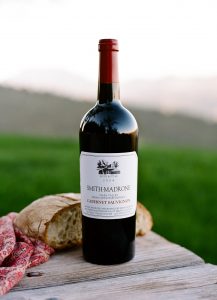 As wildfire continues to ravage wine country, Stu is extremely concerned for the future of the mountain growers in Napa County in particular around regulations. Growing up in Southern California, the Smiths have been dealing with wildfires their entire lives. In the aftermath of the Glass Fire, the mountain wineries and vineyards are facing a quest for survival. Stu has been battling land usage issues since he settled on Spring Mountain, but the Glass Fire particularly hits home as he sees neighbors leaving the region due to escalating costs being passed on to them and regulations that are prohibiting growth. In an op-ed letter to the Napa Valley Register, Stu wrote, “It is outrageous if even one family is prohibited from rebuilding their home, let alone whole groups or rural residents because of these draconian regulations. This is an unprecedented assault on property rights.”

Stu perceives a rural versus urban divide. The folks up on the mountain have a hard time articulating what they are trying to do from an agriculture and ranching perspective– the city people do not appreciate what is happening outside of their vicinity. Recently, the historic Spring Mountain Vineyard filed for bankruptcy protection, which can be partially attributed to the mounting insurance impacts from the Glass Fire. “When an industry starts to fail it’s almost impossible to bring it back– we’re not doing the things we should to protect the industry,” said Stu.

Even through the challenges, he still loves growing grapes. Whether it is out on the property or having dinner with friends, wine is the greatest beverage on earth. One can talk the world away with friends, a meal and a bottle of wine. When it comes to customers visiting, the approach is simple– be nice to people. At the end of the day, selling wine is a high touch business and in Stu’s words if you don’t like people, you shouldn’t be in the wine industry.

2019 Cabernet Sauvignon- dark stone fruit on the nose with flavors of blackberry, black cherry and just a hint of black pepper. The wine shows great balance with a nice, long finish. A composition of 83% Cabernet Sauvignon, 12% Cabernet Franc and 5% Merlot.

2017 Riesling- citrus fruit aromatics with flavors of green apple and apricot. Medium bodied in style that is clean and crisp all the way through. Drink now or hold back for ten plus years.

2018 Chardonnay- light gold in color with flavors of lemon, pear and a touch of toast. Crisp, refreshing with bright acidity.

2021 Rosé- glistening pink in color with flavors of strawberry and grapefruit. A composition of 33% Merlot and 67% Cabernet Franc. The aromatics and flavor profile will blossom as this wine comes up to room temperature out of the refrigerator.