As the pandemic continues to hinder small businesses, wineries in Napa County find themselves at a crossroad where sales are being severely impacted by Napa’s land development restrictions, which has some of the most stringent statewide thresholds a winery must meet in order to develop an on-site production facility. Having a permitted production facility on-site is a mandatory prerequisite to hosting guests and selling wine directly to consumers in Napa County. Save the Family Farms, a nonprofit organization made up of 50 or so ultra-small grower-producers, is looking to address this issue by establishing a “Micro-Winery Ordinance” that lowers the barrier to entry for producers who qualify as “Micro-producers.” The group holds the position that Napa should be a place where large elaborate wineries with marble pillared structures can coexist with small, family farms, and that diversifying the experiences available in the region will only make it more attractive.

At the center of this effort is Elise Nerlove Rutchick, who is Vice President of Operations of Save the Family Farms and Co-Owner of Elkhorn Peak Cellars.  Growing up in the family wine business, Rutchick never thought it would necessarily become a career as she started out in marketing in 2014 at a Sonoma County winery. However, after taking courses at Sonoma State’s Wine Business Institute, studying viticulture at Napa Valley College and doing a harvest internship, Rutchick would rejoin the family business.  “Growing up, I’d always watched my dad farm, but I had never seen this side of the wine industry—and I started to fall in love with the romance of it,” said Rutchick.

In the early 1980’s, Rutchick’s father, Ken, along with a partner purchased an old sheep ranch in Napa Valley’s Jamieson Canyon in South Napa. At the time, no one was growing grapes in this part of Napa Valley so they started out with an experimental vineyard—they planted one acre of Chardonnay and Pinot Noir. By the late 1990’s, their passion project had turned into a small winery business with eight acres of estate vineyard.

“There wasn’t a lot of technology involved in farming when I was growing up—when my dad had questions—he drove out to neighboring vineyards, knocked on doors and talked to other farmers,” said Rutchick. “Napa had an agricultural rural-ness to it—a timeless quality and a very charming small-town feel.” 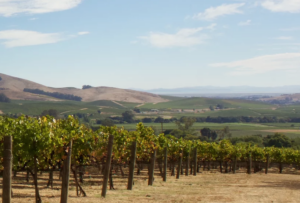 The approach in the vineyard has remained old school—Ken Nerlove can still be seen in the vineyards on his 1978 Fiat Crawler tractor as he sees classic farming equipment as being built better and lasting longer. The vineyard soil type is called the Fagan Series, named after Fagan Creek that runs along the perimeter of the now 28 acre ranch— it’s the only vineyard in the Napa Valley with this soil composition, which is a light brown clay.    “The berries that our vines produce are small with concentrated flavors. Our winemaker calls our fruit power packed,” said Rutchick.

The wine business model evolved in the early 2000’s, and distribution channels began to consolidate leading to a rise in the direct to consumer (DTC) channel. Elkhorn Peak Cellars began to pivot their marketing strategy to position themselves directly in front of the consumer. This was achieved through the establishment of a wine club, building out a customer database and finally through email as well as social media marketing campaigns.

Like many small producers in Napa Valley, Elkhorn Peak Cellars is burdened by Napa County’s Winery Definition Ordinance threshold of investing millions of dollars to build out an onsite tasting facility.

“Where does that leave the small farmer? It leaves us with few, if any, opportunities for financial success and viability in Napa County. Save the Family Farms is proposing a responsible set of regulations, tailored for the smallest grower-producers in Napa Valley so that they can participate in the Napa Valley wine economy and be viable for future generations,” noted Rutchick.

The Napa County Board of Supervisors is at a critical inflection point with the pandemic—pass sensible regulation and policy that allows small wineries to host tastings, compete and evolve their sales models or watch the small farmer go extinct in the Napa Valley, and witness the subsequent decimation of the agrarian way of life for families rooted in Napa Valley in some cases for over a century.

As the saying goes, “A rising tide lifts all boats.”

2017 Pinot Noir- estate grown on a hillside overlooking the San Pablo Bay with a cool and foggy mariner layer. This wine showcases flavors of strawberry, black cherry with just a hint of spice on the end while maintaining great balance. At 14.5% abv, this medium-bodied wine would pair great with duck, venison or possibly lamb.

2018 Chardonnay- a floral bouquet on the nose with flavors of banana, pineapple and pear on the palate. Aged in American oak for twelve months, this wine has medium acidity with a gradual finish.  At 13.5% abv, this wine would go great with a summery lobster fish fry.