Winery and vineyards offer an odd intersection, but somehow it works. For John and Lisa Gash
starting a winery was about wanting to run their own business. As hobbyist winemakers initially and working in technology as part of their respective day jobs, a winery seemed like a natural combination of both their business acumen, curiosities and passions. The name PRIE is Middle English for the number three, which also means to taste or savor. Initially, they started in Livermore, CA in an off the beaten path warehouse, which allowed them to tackle the winery on the weekends. 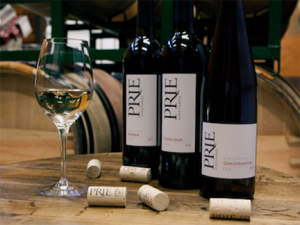 In 2011, the Gashs began looking for a long term home and vineyard property. They considered moving the venture to Healdsburg, Paso Robles or Lodi. Ultimately, Lodi fit the bill as they were already sourcing Zinfandel and Syrah from the region and loved the fruit quality. It also allowed for more affordability from an options perspective and provided proximity to their full time jobs.

Since 2010, they started with 8.5 planted acres of Cabernet Sauvignon and each year converted a block to another variety looking for grapes that fit the warming climate. The result is an intersection of French (Rhone) and Spanish types that work well within the Mediterranean climate. Each year, they make a plan on what varieties to focus on and leave room for new discoveries at the last moment. The unique thing about Lodi is there are over 100,000 acres of grapes planted (more than Washington and Oregon combined) and within that, over 100 different varieties, which offers an abundance of opportunities to make unique wines.

“We’ve discovered that once people try a new variety, they often buy it to share with friends they think would appreciate it. We find that our customers are adventurous and like to be the ones to show others what they’ve discovered,” said John.

Although Lodi is known as a bulk production region, the people hanging their shingles locally with physical presences are the small producers. There are thousands of acres that support the farming families and the boutique wineries. The climate is optimal and with the correct farming techniques can yield excellent wines.

Their overall winemaking approach has been to build a strong foundation with regards to the quality of their wine. They work with esoteric grapes like Mencia, Picpoul and Dornfelder while also utilizing more classic varieties like Zinfandel, Cabernet Franc and Barbera. PRIE tends toward a lighter style– earlier harvest picks, less barrel influences and lower alcohol levels, but at the end it all comes down to vineyard logistics and depending on what Mother Nature yields.

“As we enter our second decade of working with and in Lodi, there are signs, traction, that speak to the changes of the vineyards and wine. Driving around to the many vineyards, there is an increase in organic-based practices with cover crops and no spray signs,” said John. “In the winery we see a greater diversity of visitors traveling to Lodi as a primary destination, where ten years ago, Lodi was a secondary point or a surprise to fill in a vacation free day.” 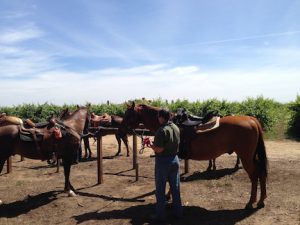 With regards to viticulture, the Gashs believe in being stewards of the land and leaving it to the next generations to come. Through extensive research, they have incorporated organic and permaculture aspects in both the winery and vineyard operations. They use non impactful approaches to managing the grounds like chicken manure over chemicals– the chickens also provide entertainment to the visitors of the winery.

“Many people come to the winery with the same dream we had – to open their own winery. Enjoying the pursuit of good wine and starting a small business are the difference between dreaming and doing; doing just takes more work and the willingness to take a risk,” said John.