Montoliva: Family Style Italian Wines in the Heart of the North Sierra Foothills

For Mark Henry the journey into the wine business was twisty and turny to say the least.  After spending several years in the Army and getting a degree in Political Science, he decided to barrel-roll head first into the beer business. Why not?

He knew it intimately well and drank a lot of it– do what you love.  He started a small chain of beer and winemaking stores. Wine was a natural extension of beer as home winemaking was on the rise. Being forced to learn the nuts and bolts of winemaking, he found his true passion. Mark wanted to take it to the next level of growing grapes and making wine for a living.  At the end of the day, farming really resonated with Mark since his childhood in Oregon.

Mark could have gone anywhere, but he fell in love with Chicago Park, on the western slopes, in the north Sierra Foothills of California. Chicago Park, a farming community halfway between Sacramento and Lake Tahoe, established by residents who migrated from the city of Chicago, many of them of Italian ancestry, in the late 1800s.  He did some heavy exploring and learned that during Prohibition grape growing was a big part of the local agriculture.  The area met all his criteria. The elevation was between 2,000-3000 feet, there was lots of volcanic rock within the soil composition and enough warm days during the growing season to grow the Italian varieties he preferred.  This is where he would establish Montoliva Vineyard & Winery. 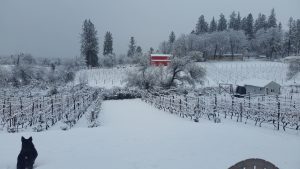 Mark followed the old adage from the early 1990’s, “There are over 3,000 wineries on the west coast [approximately 6,000 wineries today], you might be the only one drinking it– you better like it.” For many small producers, they end up growing grapes that are not optimal for a particular growing region.  He gravitated towards Italian varieties, particularly those wines from central and southern Italy.  These wines often tend to be earthy, tannic and rustic making them interesting and complex. Mark’s argument is that if you do not like these qualities in wine, you probably should not be drinking varieties like Sangiovese and Aglianico.

Two years after Mark planted the estate vineyard, he took a trip to La Crociona, a family run holiday farmhouse in Montalcino, Italy. He deep-dived extended macerations, the winemaking process by which the seeds and skins of grapes are left in contact with the wine for a longer period of time, which is a significant part of what makes “New World” versus “Old World Wines” different. This tutelage would help Mark in his pursuits of making authentic Italian wines on his 9 and half acres of vineyard in Chicago Park.

Montoliva makes an Aglianico, which is rare in California, less than 100 acres planted of the grape. From the very beginning, this variety was on his radar. What sealed the deal was a visit with Ben Zeitman at Amador Foothill Winery in 1999. He had recently grafted some of his Sangiovese over to Aglianico and was gracious enough to let Mark try some of his new wine from the barrel– he was sold.

“I like wines with a strong tannic backbone. Grown correctly, Aglianico has that in spades– it is not without its challenges. I had to remove a lot of what I originally planted here on the estate vineyard. Aglianico will get a heavy case of powdery mildew if you just whisper humidity at it. So, site selection is really important,” said Mark. “I did not know this from the beginning. One of the advantages to working with underrepresented varietals is who is going to tell me I’m doing it wrong? The disadvantage is who are you going to ask when you have questions?”

They also make a Falanghina, a white grape often found on the coast of Campania north of Naples, Italy.  Thirty years ago, it was relatively unknown in Italy, but now it is the most widely grown white grape in Southern Italy. After working with Pinot Grigio and several other white varieties, Mark became really intrigued by Falanghina. 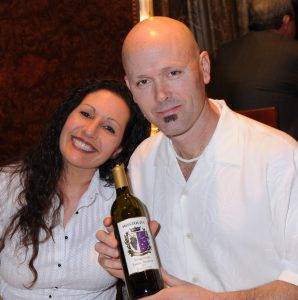 “Falanghina is still very much a work in progress for me. I threw away the first few vintages– it just wasn’t very good wine. One of the things I finally figured out was that you couldn’t let it get too ripe. I harvest it between 20.5 and 21.5 Brix. With the 2021 vintage, I did some extended skin contact, which I hadn’t done before,” said Mark.

Due to the lack of California producers making Italian varieties, Mark started actively comparing his wines to the imported Italian counterparts and then posting his notes to his website.  He called it the “Judgement of Chicago Park”, which is a playful reference to the “Judgement of Paris” that was immortalized in the movie “Bottle Shock”. “I do put my thumb on the scale a bit with some of these tastings.  I would never publish a comparison between say my Sangiovese and a Ciacci Piccolomini Brunello di Montalcino. I get around this by finding comparably priced Italian wines,” said Mark.

The country of Italy plays a centrifugal role in the winery. Stylistically, Mark’s approach is typical of smaller southern Italian producers with a familial focus on serving the community and making localized Italian eateries a collaboration in the overall process.  For instance, the annual customer appreciation barbecue is catered by La Fornaretta, a local Sicilian restaurant–Tony Bennett is also playing on the stereo.

Most of the visitors coming to Montoliva to taste wine are largely through word of mouth. At this point within Chicago Park, they are the only game in town.  The region has all the hallmarks of an outdoor recreational tourist destination– quite a few bed & breakfasts, a lake nearby, skiing just a short trek up the road, including a local eatery that serves a mean peach pie. “I sure would like to see a couple more vineyards and wineries open up here in Chicago Park, I could use the company,” said Mark

2018 Teroldego- dark crimson in color with flavors of cranberry, raspberry and blackberry. An esoteric Italian variety, this earthy wine has soft tannins, nice acidity and a lingering finish.

2019 Nero d’ Avola- flavors of plum, black cherry with a little bit of black pepper on the end.  A nice medium bodied wine showcasing earthy qualities, a touch of tannin and a smooth, dry finish.

2019 Negroamaro- flavors of dark cherry, berry  and a hint of dark tea.  A dense yet versatile food friendly wine with a lingering finish.

2021 Falanghina- straw yellow almost orange in color with tropical aromatics on the nose with flavors of orange, pear and melon. Crisp and sleek all the way through.