Boordy Vineyards has a rich history dating back to 1945 when it was founded by Philip and Jocelyn Wagner as Maryland’s first winery. Philip Wagner was a newspaperman serving as an editorial writer for The Baltimore Sun for almost 35 years.

The winery and vineyard were located in Riderwood, Maryland just a few miles north of Baltimore City.  Led by Robert Deford, the Deford family began growing grapes at Boordy Vineyards in 1965 and eventually took ownership of the winery in 1980. Under Deford’s guidance, the vineyard has become a respected leader in the mid-Atlantic wine region during a time of great prosperity and fueled growth in the American wine industry at large.

In 1997, the Delfords secured a second vineyard site in western Maryland, about 80 miles west of the winery, adding to their vineyard plantings in Baltimore County.  After farming both sites for several years, they made the decision to replant 48 acres with new varieties, clones and rootstocks.  As that massive viticulture replanting initiative was nearing completion, the Delfords refocused their efforts on building a state of the art winemaking production facility which was completed in 2013. 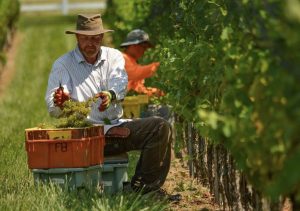 Boordy Vineyards has two vineyard sites located approximately 80 miles apart.  Long Green Vineyard is located near their base of operations in Baltimore County and sits atop a hilltop of schist and clay. The soils are well-drained and the hilltop is effective at shedding frost, although it tends to have a shorter growing season than the western site. South Mountain Vineyard is situated on the eastern slope of the Appalachian Mountains. The soils are rocky and well-drained, but also variable. Some areas of the vineyard have larger rocks and a higher percentage of clay, while other areas have smaller fragmented rock or gravel and almost no topsoil. These areas are referred to as “Dry Benches.”

At Boordy Vineyards, Bordeaux varieties are a key component of their portfolio.  Unlike the Napa Valley, Cabernet Sauvignon is often used more in blends than as a standalone variety. Some in the industry have argued that the mid-Atlantic region’s flagship grape is a red blend rather than a single grape variety. That being said, Boordy does produce several single varietal bottlings such as Cabernet Franc and Merlot.

Cabernet Franc is a well known grape-variety in the region. Boordy has a significant amount of it planted at their two estate vineyards, covering over five acres. They do two bottings every year–  A reserve and a non-reserve wine.  The grape is versatile and can be used as a standalone variety and blending component. 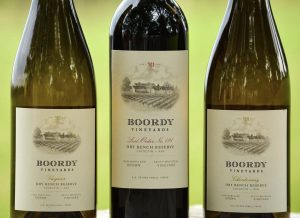 A red blend that stands out is the 2019 Lost Order No. 191 red blend.  This wine is still in its youth and will benefit from being cellared for a few years before opening. It is made up of a base composition of 65% Petit Verdot, which has a lot of tannin and a slight savage quality to it. The addition of Merlot helps to soften the blend and make it more approachable at a younger age– it is the winemaker’s go-to choice for steak night.

Boordy also makes the Landmark Dry Bench Reserve, which is a red blend with a composition of around 65% Cabernet Sauvignon for the 2019 vintage. “With the right site, Cabernet Sauvignon can do very well in Maryland, but it requires extremely well-drained soils and the ability to hang into mid-October,” said Phineas.  “ We carefully selected an area of our South Mountain Vineyard with the highest concentration of gravel and least amount of topsoil for our Cabernet Sauvignon plantings.”

As the Maryland wine industry continues to mature, it is clear that well run wineries like Boordy are committed to crafting world-class wines.  Gone are the days when Maryland was known primarily for hosting wine-themed events.  A willingness to embrace new technologies, engage in a research-based approach to vineyard management and foster a collaborative spirit within the local wine making community have paid off. Now the focus is on creating top notch vintages that can stand toe-to-toe with those from the most respected wine making regions around the globe.

Disclosure: The wines featured in the Wine Recommendations section were provided by the winery for the purpose of review. The selection and tasting of these wines were independently conducted. No compensation or incentives was provided from wineries or importers for inclusion in the story. As always, the top priority is to provide readers with informative and unbiased reporting.

2017 Landmark Reserve Red Bordeaux Blend- on the nose, this wine is bursting with ripe red fruit notes of raspberry and plum, while hints of licorice provide a touch of savory depth.  The wine’s time spent aging in French oak barrels adds a subtle oak influence to the palate, rounding out the wine’s full bodied structure.

2019 Lost Order No. 191 Bordeaux Blend- deep ruby red in color in the glass. On the nose, aromas of licorice, cocoa, and tobacco are prominent. A composition of Petit Verdot and Merlot, this wine has a nice minerality and chewy tannins thanks in part to aging for 18 months in 33% new French Oak. Ready to drink now, but has the potential to age beautifully through 2040.

2019 Cabernet Franc Dry Bench Reserve-  On the nose, expect to find dark fruit notes such as blackberry, black cherry as well as hints of leather and cigar box. The palate is treated to a softer, more rounded mouthfeel with a lingering finish.

2020 Albarino Dry Bench Reserve- expect to find notes of tangerine and orange blossom with a bright and lively acidity on the finish. Not a Bordeaux variety, but a good representation of Maryland as it is a well crafted and refreshing white wine.