We Should Start a Vineyard…

By Elizabeth SmithPublished On: October 7, 2022

“We should start a vineyard. My family in Italy did it so it can’t be that hard,” said Brian Cadamatre to his girlfriend, Nova, when they were college students. The seed was planted.

After marrying in 2005 and working in various roles in the wine industry involving a few bi-coastal moves between New York and California, Nova and Brian have found their professional and personal sweet spot in the Finger Lakes with their own brand, Trestle Thirty One, and Nova’s growing roster of winemaking and consulting projects. 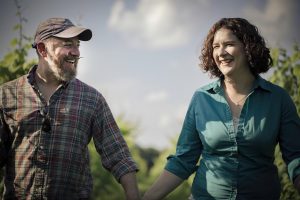 Brian and Nova: Photos Courtesy of Trestle Thirty One

Nova, who was a horticulture major, changed her major to viticulture. She worked her first harvest in 2003, began her wine industry career while still in college, and earned her degree at Cornell in 2006. Brian majored in Forestry and Natural Resources Management and found his way into the business and finance side of the wine industry.

During the past 16 years, Nova has held various winemaking leadership roles within the Constellation and Treasury portfolio of brands, the last being Director of Winemaking at Napa Valley’s Robert Mondavi Winery from 2018 until the move back to New York.

Nova pursued additional wine education in 2007, earning Wine & Spirit Education Trust’s Diploma in 2010, then the Master of Wine designation in 2017 – the first woman winemaker in the U.S. to do so. Starting a family with Brian, working full-time as a winemaker, and having to retake the Master of Wine exam a few times never deterred her from succeeding.

In 2015, Nova accepted a position as Director of Winemaking at the former Constellation-owned Canandaigua Wine Company in New York and led the growth and development of the 240 Days brand, training the team on how to make Riesling. It was during this stint she and Brian founded Trestle Thirty One and released their first wine, around 119 cases of Riesling.

The name Trestle Thirty One comes from the railroad trestle at the top of the parcel they purchased for their future Seneca Lake vineyard and the number on the deed – 31– for the tract of land. The trestle also inspired their logo, which is a “trestle table with friends and family gathered around, sharing wine and amazing food.” Nova’s mother, Linda Williams McCune, and Brian’s sister, illustrator Katie Cadamatre, are the artist and designer behind the labels and branding. Brian is the visionary and manages the business side, allowing Nova to focus on winemaking.

After a pop-up tasting at another Finger Lakes winery, Scout Cellars, where they sold about $2000 in wine, the Cadamatres realized they needed a tasting and retail location. In 2021, they purchased a building on Exchange Street in Geneva, New York, where they converted a former tattoo parlor into a tasting lounge. The building also included an apartment, which they renovated to become an Airbnb rental. The location is ideal – a short walk to Seneca Lake and the Finger Lakes Welcome Center – and a welcome addition to the small city of Geneva, which boasts a vibrant craft beverage and dining scene. 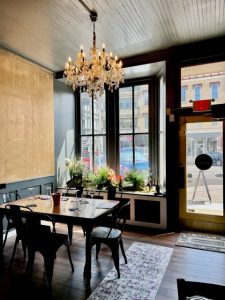 Trestle Thirty One’s current lineup of wines – still only around 600-700 cases total production – includes their flagship dry Riesling, whose grapes come from the famed Zugibe Vineyard, a Chardonnay, a rosé of Cabernet Franc, and a Demi-Sec Riesling. There is also 2021 Cabernet Franc coming soon.

Although they have forged invaluable relationships across the Finger Lakes, Nova and Brian are also planning to build or purchase their own winery. Nova is already dreaming of growing and making Pinot Noir and traditional method sparkling wine. “The Finger Lakes region has hung its hat on Riesling, but there’s also great promise in making Burgundian variety wines,” she said.

It was in fall 2021 that Nova decided to make the leap to full-time entrepreneur – focusing on Trestle Thirty One, her Napa brand – Faidh Ruadh – her winemaking consultancy clients, and other endeavors like public speaking, teaching, and writing – including a forthcoming book about overcoming obstacles. 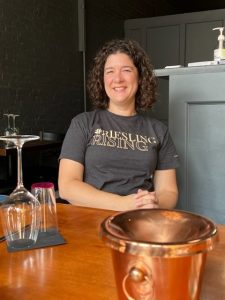 She and Brian also decided they wanted to raise their children and be closer to their families on the East Coast, so in spring 2022, Nova, Brian, their two sons, Brian’s parents, and their two cats departed Napa in an RV. Across three weeks, they made their way to their new home between Rochester and Geneva, which provides Nova easy access to the airport and the Finger Lakes.

During her nearly 20 years working in wine, Nova realized she did not want to be a corporate winemaker locked into specific winemaking styles, grape varieties, etc. “I can make anything,” she shared. As an independent winemaker, she is present every step of the way – or as she says, “Zero-level detail oriented” – especially during harvest and fermentations to ensure utmost quality.

However, Nova not only wanted to have full control over winemaking, but also her own destiny. On the one-year anniversary of deciding to become fully self-employed, Nova reflected on her decision on LinkedIn,

“It has been the scariest and most rewarding thing I have ever done. I’ve been able to go 110% on my own brands which is so rewarding. I love working in the tasting lounge and talking to guests about our wines. I am SO excited about the future of my clients’ projects. Bringing new vineyards and brands to the world invigorates me and my creative side. I can truly say I am the happiest now that I’ve ever been in my adult life. I’m able to be the mom my kids need, be there for my family, and do what I love every day. It no longer feels like work.”

As it turns out, Brian’s vision of “starting a vineyard” was not far-fetched. In fact, it has become merely a stepping stone to something greater than either he or Nova could have imagined – a fulfilling life – not without challenges, change, and cross-country moves – but one that is made even sweeter because of them.