By Elizabeth SmithPublished On: February 24, 2022

Dr. Robert Sinskey, founder of Robert Sinskey Vineyards, was a forward thinker who envisioned the popularity of healthier, locally farmed, and global cuisine accompanied by a lighter-bodied red wine, Pinot Noir. In 1982, he purchased a farm off Las Amigas Road in Napa Valley – before the establishment of the Carneros AVA and in anticipation of his retirement – to become a Pinot Noir grower.

He partnered with Acacia Winery to grow grapes, but in 1985, Acacia lost its footing and sold their business. Sinskey had not yet retired, but rather, had continued working, creating the Sinskey modified J loop intra-ocular lens, an artificial human lens that revolutionized cataract eye surgery. Yet here he was with 115 acres of grapes. He hired a former Acacia winemaker and began producing wine. He purchased the winery in the Stags Leap District in 1985 and the first vintage was 1986.

Today under the helm of vintner and photographer Robert (Rob) Sinskey, Jr., Rob’s wife and renowned chef, Maria Helm Sinskey, and longtime winemaker Jeff Virnig, Robert Sinskey Vineyards (RSV) continues to be a leader of organic, biodynamic, and regenerative farming and winemaking with an emphasis on the “gluttonous hedonism” of wine and food.

RSV owns six vineyards. Five are in Carneros – the Three Amigos Vineyard (established in 1982), Vandal Vineyard (1986), Capa Vineyard (1992), OSR (Old Sonoma Road) Vineyard (1996), and the Scintilla Sonoma Vineyard (2001) – plus the SLD (Stags Leap District) Estate Vineyard (1986). RSV’s farming philosophy is “nature hates monoculture.” In their vineyards, one will find an abundance of life like beneficial insects and predators, birds of prey, honey bees, flowers, fruit orchards, and vegetable gardens, the latter of which find their way to Maria’s recipes and the vineyard kitchen for organic snacks to accompany tastings, as well as the Root to Table, Eat Drink RSV, and Perfect Circle Chef’s Table experiences.

It was in March 2021 when I first visited RSV. Anyone who knows me is aware of my love of cooler-climate, higher-acid varieties like Pinot Gris, Pinot Blanc, Riesling, and Pinot Noir, as well as my fondness for Cabernet Franc and Merlot. I thought, “Why am I not familiar with RSV?” What I learned is people discover RSV through word-of-mouth and winery direct communications. RSV does not submit wines to critics for scoring. “To apply a score in an attempt to anoint the best wine is an absurd exercise. What is one person’s favorite might be another’s swill. It is subjective based on personal taste,” wrote Rob Sinskey, Jr. 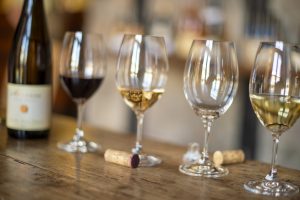 RSV also releases wines with bottle age. Many vintages are cellared, awaiting the optimal drinking window. Once the wines are released, it is only the beginning, as Virnig makes the wines to last for decades. “Our age-worthy wines convey purity, understated elegance, seasonality, and the rustic simplicity of our farm.”

When I asked the RSV team to share one thing that would entice someone to visit and taste, general manager Phil Abram replied, “Experience guilt-free hedonism! Food and wine should be fun and unpretentious. Everything we do, we do in ways that help heal an ailing earth rather than damaging our planet.”