One of the Santa Cruz Mountains AVA’s most iconic and best-known brands, Ridge Winery, celebrates its 60th anniversary this year. David Amadia, President of Ridge, who worked for Randall Grahm at Bonny Doon for four years prior to joining Ridge in 2005, says they are excited for the winery’s “Diamond Jubilee.” Amadia is putting together 100 lots of Ridge wines for a special auction in London with Christie’s later this fall. Amadia explains, “We attribute our success to Draper’s leadership and philosophy. We are single-vineyard winemakers. We translate grapes into bottle, using only pre-industrial winemaking, which means native yeast, no additives and no processing.”

Consistency is what Ridge customers count on. “They know when they pick up a bottle of Ridge wine that it is going to be good,” says Amadia. “An iconic brand has to be careful with change.”

Yes, change can be dangerous, but change can also be liberating. It can also be the beginning of new greatness. When long time Ridge winemaker and Santa Cruz native, Eric Baugher, left the company in January of 2021, after 27 years of making wine at the iconic winery consistently named among the Best in the World, his departure caused an internal cataclysm. Consequently, little was said by the Cupertino company, who quietly proferred that Geyserville winemaker, John Olney, was now in charge of winemaking, saying nothing about Baugher’s leaving.

So here’s what really happened. By 2016, when Paul Draper retired, Baugher, who had just been named COO, was making vintage after vintage of classic Montebello, adding gems like Pinot Noir and Grenache Blanc to the portfolio. He expanded the winery’s access to Chardonnay fruit from outside the estate, and was planning to make more wines from the Santa Cruz Mountains region. He says he had also reached a stasis point. The winds of change were beginning to blow.

With them came an opportunity he could not turn down. Bill Foley approached him with an offer that piqued his interest and got the creative juices flowing. So, Baugher moved to Merus, a former “ghost winery” on the east side of Napa. Foley’s motivation was to restore Merus to its former high level of high regard. For Baugher, it was a chance to break free and evolve. 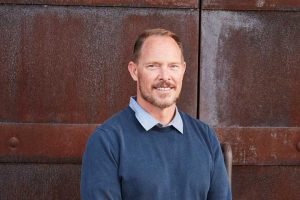 An Aptos resident, Baugher graduated from UC Santa Cruz in 1992, with a degree in molecular biochemistry. He told us, “My plans where either to enter a Ph.D. program and go into pharmaceutical research, or go to Dental School. I wasn’t quite sure what I wanted to do after graduating. I took my Dental School Admission Test and hit a 98% score, and could have easily gone right into a school, but I needed a break after UCSC.” That’s when he saw an ad from Ridge in the Santa Cruz Sentinel. They were looking for a chemist. He was one of several hundred to apply for the position. He first interviewed with UC Davis chemistry major, Jim Kennedy, who was working in quality control at Ridge at the time and would go on to earn his master’s and doctorate degrees in enology and teach at Oregon State and Fresno State. “He’s now known as Dr. Tannin,” Baugher says. “I showed up really late for the interview, because I was so lost! No GPS back then!”  He went back later to interview with winemaker Paul Draper and Wilma Sturrock, who was President at the time. “She was the heart of place. She knew absolutely everyone.”

Baugher says he also had to interview with Gordon Binz and Leo McCloskey. “I couldn’t believe how many people I needed to talk to for what seemed like such a minor position, especially one that I was probably only going to be at for less than a year!”

He feels it was his UCSC transcripts, which consisted not of grades, but of narrative evaluations by his professors, that aced it. They contained details of his character, study habits, and how he did in each class.  “I think that made a huge difference for Paul and Wilma, who were always concerned about who was being hired and their character.  As it turned out, I got the job and this was out of a few hundred candidates that applied.  The rest is history. It became a career by pure chance.”

When Baugher took the job, he only planned to stay for a year, but in the summer of 1995, both Kennedy and the production manager left, leaving Draper without harvest help. Baugher stayed on. He quickly realized he’d found his calling. Working his way up the ladder, he was named Head Winemaker in 2004, and led the winery to two 100-point scores (vintages 2013 and 2017) and two spots on Wine Spectator’s top 100 list. Hard act to follow.

When we visited Baugher last summer, we tasted through the barrels that had been left by the former winemaking team at Merus. There were some definite gems amongst the largely lackluster collection of vintage 2019. There was a definite gleam in his eye as he told us he believed he could at least make something reasonable from the 2019 shards. The 2020 vintage was completely lost to the fires, which nearly consumed the Merus winery, which has the great fortune of being partially built into a hillside. The fire left the winery windows severely heat damaged, but the caves protected the wine in barrel there.

It was all going to ride on the 2021 vintage, as there was nothing to show for 2020, and 2019 was a gamble. He set about sourcing the very best fruit he could for harvest 2021. Merus had primarily procured Coombsville fruit in the past. Baugher, accustomed to the intensity of Monte Bello, wanted mountain fruit instead. He was fortunate to obtain some from the very best and highly esteemed Napa sites, including Mt. Veeder, Spring Mountain and Penny Lane. Tasting 2021 barrel samples from these vineyards showed amazing depth and potential: dare we say, reminiscent of Monte Bello, but with perhaps more ripe fruit and tannin? 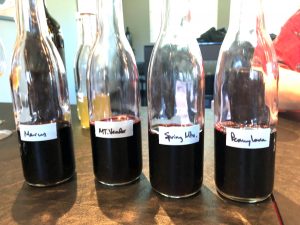 The Mt. Veeder barel sample displayed violets and lavender aromatics, with bracing blueberry, olive and cedar on the palate, buoyed by intense acid. This is a stoic wine, comprised of all Cab clone 4, picked Sept 18 and 30, at 25Brix. It adds stalwart structure to the blend he’s working on. “I’m getting all of this vineyard for 2022,” he told us.

A real standout was the Spring Mountain barrel sample, from a dry-farmed vineyard that Cain typically sourced from, but was unable to do so in 2021. Aromas are of steep weed-covered hillsides, which reflects the terroir of the vineyard. The wine is mind-blowingly elegant and lifted, with hints of tarragon, and a flow and spirit much like Cabernet Franc, even though it is 100% Cabernet Sauvignon.

The Penny Lane barrel sample, a co-ferment of Cab Sauv, Cab Franc and Merlot, presented a fascinating nose of dark plum and soy, and dominant espresso and chocolate on the palate. Planted by David Abreu on alluvial soil, this wine was aged only in Kentucky oak and is intensely structural in nature.

Finally, the Merus blend Baugher presented us was 20% from Mt. Veeder, with fruit from several other vineyards including Heitz and Penny Lane. “This used to be all Cabernet Sauvignon, and all from Coombsville,” Baugher noted. “Now it is a real blend of Bordeaux varieties from multiple terroirs.” He may be understated and measured in his approach, but his excitement was impossible to disguise.

Vintage 2021 has other surprises for Merus members, which, by the way, is the only avenue for accessing these wines.  Baugher has come to love white wines more and more, and was delighted to obtain Roussanne from a Rutherford vineyard owned by Patrick Foley, Bill’s son, that was grafted from Petite Sirah in 2017. Fermented slowly in a 50-50 mix of French and Kentucky oak in the coldest part of the cave, it is richly endowed with pineapple and orange creamsicle. The natural acidity is unflinching.

Baugher also made two Chardonnays for 2021, both in very small quantities. One is from Coombsville: Chardonnay clone 4 on 110-R rootstock, exhibiting aromas of crystallized ginger and pouring a velvety dollop of pineapple upside down cake all over the palate with a finish of ginger biscotti.

The other is the 2021 Sage Canyon Chardonnay salvaged from Kuletto’s Sage Canyon Vineyard that burned in 2020. This wine is a testament to survival. Only 100 vines came back, but they sure put out some lovely juice, all tropical and pear. “It was a pathetic yield,” says Baugher. “We had to use the old basket press.” But, it was well worth it.

Wine, like the human spirit, is capable of perpetual renewal.

Baugher himself is well on his way to writing the next chapter of his life. “When I was at Ridge, we got some Napa Cabernet fruit and the wine we made from it was extraordinary. The sales people were practically freaking out, saying we can’t have a wine that is better than Monte Bello! So, we stopped making it. Now, I’m really happy to have the opportunity to make the best possible Napa Cabernet I can, applying what I’ve learned over my many years of making Monte Bello.”

That could actually be magic.