It’s common that many winemakers’ have similar motivators that fuel their passion. For Scott Nelson, it was the art, science, and process (not to mention the food and wine pairings) that hooked his interest and hobby. After seven years of being a garagiste, dreaming of shifting production into a commercial venture, it was a conversation with his son from Iraq that flipped the switch to launch the process of becoming an urban winery. While son Cameron had been exposed and assisted in Scott’s passionate hobby during his short stints home, it was in the deciding a future for himself after his tour of duty in the USMC that led him to join his father and pursue an enology program when he was discharged and settled. It can’t go without noting, another subtle motivator to choose the commercial route was the growing non-saleable inventory produced as an amateur that either needed to scale back or ramp up. With Cameron on board, in 2013 the scale tipped to full steam ahead to build a legacy enterprise with mom, Kathie, cheering from the sidelines, ready to lend a hand.
Tucked away in a suburban neighborhood less than 2 miles from old town Beaverton, Oregon and 20 minutes from downtown Portland the Nelsons launched Résolu Cellars. The brand name was an interesting choice as many options were considered to find a unique name that represented the varietals, the winemaking style and commitment to handcrafting quality wines. After applying both a creative and scientific approach Résolu won the day. French for “Resolute” meaning determined or unwavering the family felt this truly represents the family’s mission and the character of wines they craft.
While the winery is located in the Willamette Valley AVA they source their grapes from select family vineyards with a similar mission from nearby Chehalem Mountains AVA, a sub-AVA of Willamette Valley as well as the Yakima Valley and Horse Heaven Hills AVA within the Columbia Valley AVA in Eastern Washington. “Being a micro-urban winery has given us the flexibility to go beyond the traditional fruit of Willamette Valley,” said Scott. “Our broader offerings of bigger and bolder reds grown in the Columbia Valley in Washington State appeal to local wine aficionados who enjoy the same.”
Since 2007, the Nelsons have been cultivating relationships with growers, and in many cases, leveraging the same blocks of grapes to maintain a level of consistency with their vintages year-after-year. “Our customers appreciate the depth and breadth of the selection as we are able to obtain larger quantities of fruit and expand our offerings of Barbera, Petit Verdot, and Cabernet Franc,” said Scott.
Overall production has grown from 125 cases in 2013 to over 500 cases today. With a commitment to barrel aging 2 years, the winery has literally grown out of the addition on their residence and hit the ceiling on production. Kathie reports, “Scott began in the garage with half a barrel expanding to build a mini shed with intent to last a few years but the hobby grew quickly, and after the economic hit in 2008, he was able to very cost-effectively add on a deluxe addition to house the hobby in 2009. This eventually became the licensed and bonded area of our property.“
Considered a teaching winery by many, Scott frequently donates his time and expertise in business and operations to help emerging winemakers get off the ground. Customers and crew find him easy to engage to answer questions and share insights. Collaboration and generosity has been one key to their success as they personify the philosophy “A rising tide lifts all boats”, as the saying goes.
When asked about roles, responsibilities, and future within the family construct, Kathie responded, “At the end of the day when it comes down to growing a business together tact and grace are essential. Due to the grassroots evolution of growth and a home-based start, we’ve been blessed to have opportunity to grow up into the roles a venture like this requires.” Kathie, from her role as Brand Ambassador continues “As craft producers and self-distributors the future looks bright. Our location and size give us the flexibility to evolve with the market and opportunity. We collaborate with other artisanal producers, bottle shops and restaurants to attract and serve a fresh cross-section of customers and recently added an online store to ship out of state.”
2016 Pinot Noir–  Bright fruit notes right off the bat.  A little touch of oak on the nose. Generous mouthfeel with berry notes complimenting this full-bodied wine at 14.4% ABV. Sourced from Chehalem Mountains and barrel-aged for two years in new French oak.
Pair this wine with steak tips.
2015 Résolu Cellars “Triomphe” – a rich full-fruited red has strong aromas of dark fruits- a little bit of cedar and wood. Sourced from premium grapes in the Columbia Valley of Oregon and Washington this blend is made up of 36% Cabernet Sauvignon, 27% Cabernet Franc, 14% Petit Verdot, 20% Malbec, and 3% Merlot.  At 14.8% ABV, this “well-rounded wine hits on all cylinders from start to finish so rev it up and take it for a ride”.
Crack it open with some Texas baby back ribs and barbecue sauce. You won’t be disappointed.
2018 Viognier – crisp with a bit of melon and pineapple touching down. With a tiny amount of residual sugar to balance out the acidity, at 13.3% ABV, this is a great outdoorsy wine. Sourced from Willamette Valley, this refreshing medium-bodied wine will have you dreaming of the outdoor patio. This would pair nicely with scallops. 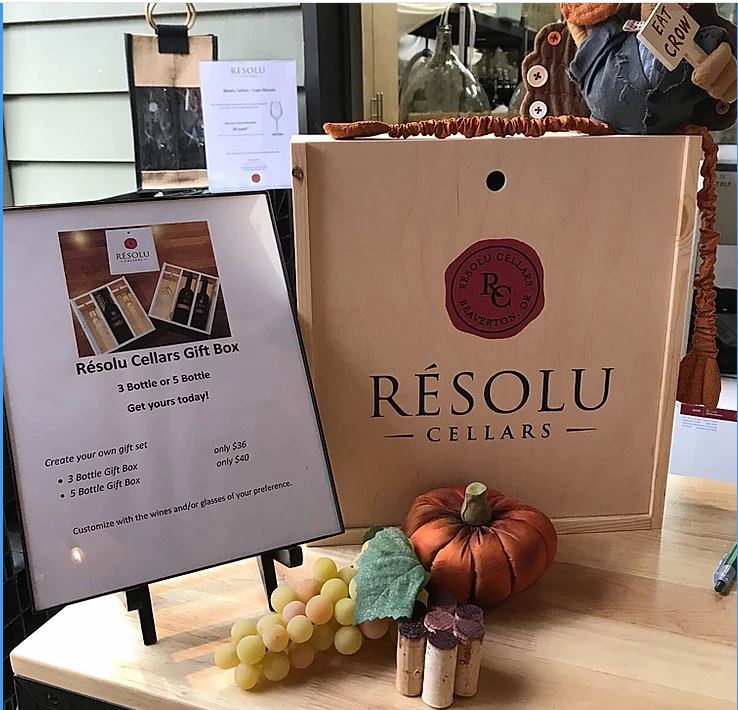