By Elizabeth SmithPublished On: November 21, 2022 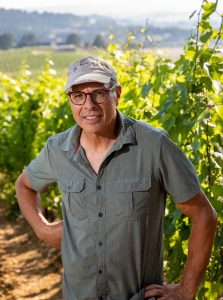 Steve Lutz is not your typical vintner/winemaker. Some in the industry have called him a maverick. Lutz has proven himself to be just that, by launching a premier Pinot Noir (plus a little Chardonnay) vineyard, winery, and tasting room from scratch on one of the most challenging – yet ideal – plots of land in Yamhill County, Oregon, and by creating a consumer blind tasting experience that goes beyond the industry standard – putting his wines against other wines around the world and letting the chips fall where they may.

Lutz, an Oregonian, began his career in Napa Valley in 1984, when he developed a taste for wine shortly after college. He worked at several well-known wineries, including Robert Mondavi. It was at Mondavi where Lutz and the Mondavi team would participate in staff blind tastings led by Robert himself. Soon thereafter, Steve was making his own wine in Napa Valley. He would also open and close a restaurant in Santa Rosa, Sonoma County, then spend a year in London where he met his wife, Karen.

The itch to return to Oregon led the Lutzes to Willamette Valley in 1998, where Steve initially worked with wineries like Chateau Benoit and Anne Amie Vineyards. The desire to have his own vineyard and make his own wine soon trumped working with or for others, so in 1999, he and Karen began a search for their own vineyard site. In April 2000, they fortuitously found a steep 20-acre hillside in the Yamhill-Carlton AVA with the right elevation (375-575 feet), orientation (south facing), and soil (nutrient-poor peavine) that Lutz describes as “the worst soil in the county” – all perfect for growing Pinot Noir. The Lutzes named their estate Lenné, a play on the name Lenny, Karen’s father’s name, because it was the inheritance he left that paid the down payment. The Lutzes planted the vineyard in 2001 and the first vintage was 2005. It was not until 2007 that Lutz had what he described as his first “normal vintage.” He also opened the tasting room that same year. 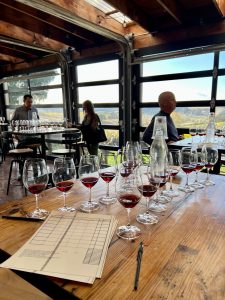 Not only does Lutz offer onsite tastings, but also “consumer wine education” – including vineyard tours, virtual tastings, and blind tastings – where he puts at least one of his wines in a lineup with seven others. In 2022, he offered five blind tastings whose themes included Burgundy, Oregon, Dundee Hills versus Yamhill-Carlton, Chardonnays around the world, and Pinot Noir around the world. Lutz sends the invitation to his general mailing list, but only a maximum of 16 guests may attend. Tickets sell out as soon as the email invite hits inboxes.

Lutz provides a notes sheet that usually lists the wines in the tasting, but in no particular order. When asked whether he always provides the lineup in advance, Lutz replied, “Not always but generally we list the wines randomly with price points, which makes it easier for guests to follow along. Maybe one in 100 would pinpoint a wine in the tasting by looking at what we are tasting.”

The guests sampled the eight wines quietly on their own for about 30 minutes – without conferring with each other – took notes, then ranked the wines from one (their favorite) to eight (their least favorite). The Lenné staff collected the notes, then Lutz led the reveal of each wine, including information about the region, the vineyard, and winemaking style. The top two wines were from California – Anderson Valley in Mendocino County and Russian River Valley in Sonoma – much to the surprise of the primarily Oregon contingency. 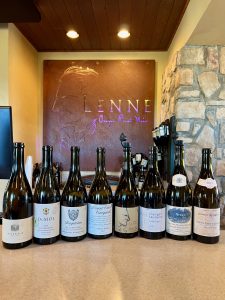 The 2021 Lenné Pinot Noir ranked fifth, but the four wines in the middle were only separated by one point. Regarding his entry, Lutz was confident in its appeal. “I love that wine, which is why I put it in. I thought it was the most fruit driven in the bunch, and I was happy how it showed. I know that if most of the participants sat with a bottle of that wine, they would have come away enamored with it,” he said. “To be honest, we don’t sell a lot of wine even when our wine comes in first.”

Which begs the question – why has Lutz offered blind tastings for 15 years? “We do them because we like to. It is a terrific way to learn about wine – not the only way, but an important way. We keep our palates educated and they are a lot of fun for everyone involved.”

Whatever the initial draw was to attend this tasting, everyone enjoyed themselves and learned which aromas, flavors, and textures they prefer in Pinot Noir. The blind tasting barely scratched the surface, but Lutz opened the door to the vast and varied world that is Pinot Noir.

Author’s note: I was that one guest in 100 that guessed two of the wines in this tasting.