For the Love of Fog: Marine Layer Wines

Wine is largely a pilgrimage: both for the people who make it and for the people who seek to appreciate it. There are so many things to learn. Attending winetasting seminars with a group of winemakers who have different viewpoints yet many commonalities, is fodder for a fantastic learning experience, which is just what the audience got when they attended “Winemakers and Their Muses” at the 2022 Big Sur Food and Wine Festival held at the Alila Ventana resort in early November. Among the six panelists presenting their “muse” wines alongside one of their own wine inspired by that muse, was Baron Ziegler, who has been in the wine business since before he was old enough to drink. He has an import business called Valkyrie Selections, and founded a brand called Banshee, with his winemaker buddy, Rob Fisher, which they sold to Foley Wines in 2018.

That freed them up to pursue a goal of making pristine wines from the Sonoma Coast. They wasted no time in snapping up great fruit from storied vineyards like Durrell and Gap’s Crown, as well as Heintz, to feature under their new label called Marine Layer. Their first vintage was 2018, and a kindred spirit partnership with Chef Kyle Connaughton and former Somm Rusty Rastello of Single Thread, did much to elevate the popularity of the brand, which became a hit with somms across the land. Essentially, Ziegler and Fisher are offering a unique slant on Chardonnay and Pinot Noir that walks a fine line between coastal linearity, leanness and focus, and the pleasing depth and intensity wine drinkers expect from a California wine.

As Ziegler noted in his presentation at the Big Sur Food & Wine seminar, he aims to make cool climate wines that defy California’s sunny high alcohol reputation. Working with marine influenced vineyards, like those in he Marine Layer portfolio, which ranges from Annapolis to Petaluma Gap, he noted, “You can make 12.5% and 13% wines with crazy depth and intensity.” He pointed out that all the “Muse” wines at the seminar were from Europe. “But,” he stated, “We are not trying to make European wine. In fact, we can’t make European wine, nor would we try! However, with climate change, it is getting harder and harder to tell the difference between California and European wines in blind tastings.” That certainly is a topic for much future discussion.

Recently, Ziegler and Fischer opened a brand new tasting room in Healdsburg, and I had the pleasure of tasting their current lineup, which includes wines from their nearby coastal lair, as well as from far far away. The fires of 2020 meant they pretty much lost most of their fruit sources in Sonoma, so they ventured south where Fischer has connections. Never underestimate the lasting power of college roommates and classmates in a pinch. 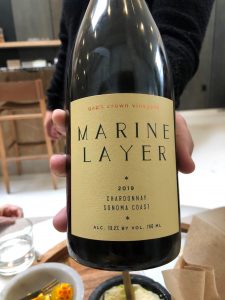 We began with the 2019 Aries Chardonnay (13.6%, $40), a dream wine that combines fruit from four great vineyards—Durrell, Gap’s Crown, Bohemian and Charles Heintz from Green Valley— in a complex and engaging wine that punches well above its price point. The oak influence adds up to 30% new, and native fermentation along with gentle lees stirring results in a wine that is lithe and supple, with lovely lemon peel, green apple, Cara Cara orange, lime and pineapple notes, caressed by vanilla.

Then came the 2019 Gap’s Crown Chardonnay (13.4%, $50), definitely sporting more new oak (35%) and a fruity richness — think creamy orchard peach Danish and baked cream biscuits with tangerine marmalade — that tells you its feet are farther from the fog. My favorite of the Chardonnays, which is not on the tasting menu at present, was the 2019 Durrell Vineyard, which Ziegler had poured for us at the Big Sur Food & Wine Seminar, alongside a 2020 Domaine LeFlaive Bourgogne Blanc. Just brilliant, with kumquat, Bosc pear, quince and a texture of rich Meyer lemon pudding. Yet the acid never quits. Ziegler happened to be tasting it with his staff during my visit and brought us a splash, along with the 2019 Marine Layer Brut Rosé (12.5%, $80), that had spent 18 months on the lees at Carboniste, a sparkling wine house operated by Dan and Jacqueline Person. It is slated to be released next Friday, 11/25/2022.

The 2020 Lyra Pinot Noir (13.8%, $45) is a quintessential coastal Pinot Noir that offers up weedy hillside aromas, along with red plum, red cherry, rhubarb and baking spice, especially cinnamon. It hails primarily from the estate Marine Layer Vineyard in the Sebastopol Hills, and Dutton-Upp Road Vineyard in Green Valley. Ziegler explained that the day the fires started in 2020, they got their act together really quickly and pulled fruit off. They were locked out of their custom crush facility for 10 days, so the grapes had extra long soak time before fermentation, which occurred during the next three weeks, when they could do occasional punchdowns, as power and smoke conditions permitted. Turned out pretty nice, actually. But that would be it for Sonoma Pinot fruit for 2020. So they turned their sights south.

Tapping into another college classmate from Cal Poly SLO, Bill Brosseau, Fischer sourced some amazing Syrah from the Brosseau Vineyard in Chalone. Wild, weedy aromas of baking chaparral in a dry landscape, dried licorice, mustard seeds and balsamic, this is intense stuff, done with 75% whole cluster. My friend John who joined me for the tasting, winked, “I’m waiting for this thing to bite me!!” The 2020 Brosseau Syrah (13.2%, $60), did seem coiled as menacingly as a rattler, a common sight in these parts, in the shadow of The Pinnacles National Monument. But the flavors are way less imposing, leaning to dark plum, dried blueberries, sage, rosemary and white pepper, making for a highly intriguing rendition of Syrah.

A word about the Marine Layer tasting room, which is airy and comfy, with four distinctly different zones, catering to audience preference. Do you want to sit by the fireplace in sunken couches, at the bar with high-backed stools interacting with the staff, or would you prefer to be seated at a café style table where you can best enjoy the Mezze platter created by Kyle Connaughton himself, who oversees the culinary program for Marine Layer? Or do you want to sit far from the street, in the quiet library-like atmosphere to the back of the tasting room, sinking into one of the many deep-backed couches with coffee tables? All choices lead to the same outcome: a relaxed environment in which to taste some truly stellar wines, illuminated by fascinating pendant lights made by Oaxacan artists, and warmed by Moroccan wool rugs.

The fare on the mezze platter ($25) is plant-based, with a cashew “cheese” dip with chile oil drizzle that will blow your mind, and a chickpea and fennel oil hummus that was divine with the perfectly cut multicolored radishes and carrots and garbanzo bean crackers. Simple, fresh and natural ingredients combined to create complex, memorable tastes: like the wines themselves.

About the Author: Laura Ness

Laura Ness is a longtime wine journalist and wine judge who enjoys telling tales of winemakers, winegrowers and wines. Each bottle of wine has a story to tell, and becomes part of the story of those who consume it. For over 20 years, she has written regularly for a variety of industry and consumer publications. Every purse she owns contains a corkscrew.