By Elizabeth SmithPublished On: December 16, 2021 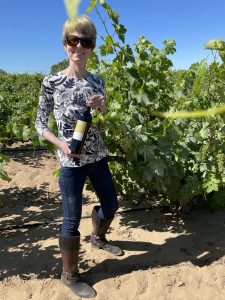 One such vineyard is the Del Barba Ranch and its 12-acre block of Carignane, Mataro (also known as Mourvèdre or Monastrell), and Zinfandel that dates to the late 1800s, around the time first-generation immigrant Venanzio Del Barba departed Lucca, Italy, and settled in Oakley. After working on the railroad and as a farmer for a few years, he opened a general store, then purchased the ranch vineyards on Rose Avenue with the income from these endeavors. The Del Barba family likened the area’s Mediterranean climate and influence of bodies of water like the nearby San Joaquin River and San Francisco, San Pablo, and Suisun Bays to Lucca. “I check the weather in Lucca nearly every day and it is almost identical to Oakley,” said Del Barba.

My introduction to Del Barba Ranch was through winemaker Matt Parish, whom I assist with social media. He hosts monthly Winemaker Wednesday Wined-Up chats using Zoom and Facebook Live. One of the chats included guests Tom Del Barba and Julien Erggelet and Parish’s wines from this block, which piqued my interest in visiting.

During my 55-mile drive from Napa to Oakley, my scenic views included highways, traffic, wind turbines, refineries, and cookie-cutter neighborhoods. When I exited the highway, I found myself in a small city of around 43,000 inhabitants, replete with shopping centers, gas stations, new housing developments and land designated for redevelopment. Among the environs of suburbia, I saw vineyards tucked away within what has become a less costly “bedroom community” for commuters working in San Francisco and other large cities. “These vineyards are hidden in between but lost out of sight,” said Erggelet. 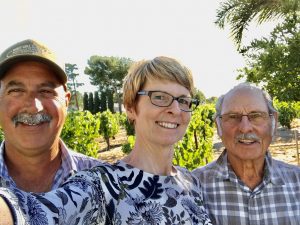 Tom Del Barba took me on a tour of his family’s ranch. He led me to these 12 precious acres of approximately four each of Mataro, Carignane, and Zinfandel. In this pristine block, which is lovingly nicknamed Louie’s Block after Del Barba’s Uncle Louie, who died in 2010, the vines are multiclonal and own rooted, not grafted, which means they grew from vine cuttings and established their own roots. “The depth of the tap roots are at least 10 feet through many shades of calcium,” said Erggelet.

The vines have survived and thrived because they predate phylloxera, grow in the hot “Oakley Sands” that resist mildew and pests and wick away moisture, and are classically head trained, not trellised. “Head training allows the canopy to develop in any direction and protect the fruit, and also provides good wind flow from all sides,” added Erggelet. “We only irrigate three to four times per season, five gallons each time, not to push green growth, but rather, allow the vines to carefully stress.” Maintaining the best growing conditions requires the constant attention of Del Barba. “If the vines become overly stressed, such as during a heatwave, you lose the green growth in a day and grape desiccation will occur within 48 hours,” said Erggelet.

It is the Del Barba family’s impeccable and consistent multigenerational farming that has made Louie’s Block the centerpiece of the ranch and one of Contra Costa County’s best. “This original parcel of centennial vines is strong and healthy because of the farming integrity of the caretakers, the Del Barbas. They have demonstrated unparalleled dedication and perseverance throughout the generations,” said Erggelet.

Several years ago, Parish tasted a wine made from Del Barba Ranch fruit. It made such an impact that he soon met with Tom Del Barba, and the two decided to work together. Both the fruit quality and the history inspired him to make two wines, his Rosé of Carignan and Mourvèdre and Louie’s Block Old Vine Zinfandel. Under Parish’s direction, Del Barba harvests the Carignane and Mataro early for an intentional rosé, which shows red berry and melon flavors, and softer acidity at a pleasant 12% alcohol.

Parish is the only winemaker sourcing and making a wine from Louie’s Block’s four acres of Zinfandel. The berries have a complex vertical profile due to the vigor-reduced, small-bush, and head-trained vines that produce a lower yield, but more intensity. “Selecting the Del Barba Ranch was simple. Here you have a 130-year-old block planted in well suited sandy soils that has been impeccably farmed by the same family for four generations. This enables me to make a floral and refreshing rosé in the targeted Provence style and a decadent Zinfandel that is rich, dark, and textured,” said Parish. Added Erggelet, “The benefit of a winemaker like Matt Parish is he cherishes and respects this block’s heritage and quality and remains true to the varietal characteristics. He also makes his wines on a significant scale, introducing many new wine drinkers to something they have never tasted.”

Since 2016, Erggelet and his brother, Sebastian, have been making a small-production Carignane from Louie’s Block under their Erggelet Brothers label. Their minimalist approach to winemaking includes indigenous yeast fermentation, eight months of full lees aging in neutral Bordeaux barrels without racking the wine, then bottling it unfiltered and unfined. They made five barrels of the 2016 vintage and 10 barrels of the current release 2018 vintage. The Erggelets describe the latter as exhibiting notes of cherry, cranberry, plum, and lilac. The alcohol by volume is 13.5%, the grapes picked at 23 Brix the first week of September 2018.

After our tour with Del Barba concluded, the other guests departed, and Del Barba invited me to his father’s home for coffee and biscotti. Fred Del Barba, who is 86 years old, still works daily in the vineyard alongside Tom. As we discussed the urbanization of Contra Costa, the two shared an exchange about looking towards the city of Antioch’s rooftops a few decades ago. Tom asked, “The houses are coming. How much longer will we be here?” Fred replied, “I’ll be dead by then.” When I asked how they have managed to withstand the citification of Oakley, Tom replied, “If we are making a living, we don’t need to sell. The natives and longtime residents would rather see vineyards than more shopping centers or houses.” The magnificent vines of Louie’s Block owe their continued existence to the Del Barba family’s stewardship of the land and the preservation efforts of Parish, Erggelet, and others.

A few hours later Del Barba drove me back to my car and told me I was welcome anytime. I removed the old riding boots I had worn in exchange for more comfortable driving shoes. I was glad I brought them as the sands are deep and dusty. I glanced at my jeans and noticed they were as dirty as my boots. I smiled. I had forged my own connection with the Del Barbas and the authenticity and legacy of their enduring family vineyard.