Since arriving in California in the early 1980’s, Donald Patz has worn many hats in the wine industry.  From starting in sales at Flora Springs Winery to being a founding partner at Patz & Hall Winery, Patz has endured the ups and downs of the wine business. After selling Patz & Hall to Chateau Ste. Michelle winery, he would go on to establish the Donald Patz Wine Group, which is a combination of three small producer brands.  Maritana Vineyards, producer of Chardonnay and Pinot Noir out of the Russian River Valley.  Terminem Wines, a collaboration with Francois Villard with an intersection of styles between the Rhone Valley and Napa Valley. Secret Door Winery focusing on Napa Valley Cabernet Sauvignon.

For Patz, the first 12 months after selling Patz & Hall to Chateau Ste. Michelle was an interesting lesson in learning how a large wine producer functions.  They have a much different relationship with distributors than the smaller wineries, but for Patz ultimately it was about balancing his personal life against any future projects that might come his way. Making decisions on the fly without a lot of red tape was a driving factor as the wine industry at large was becoming more nimble and digital. Small business partnerships was the path Patz took.

Surrounding himself with key personnel was paramount as he immediately outsourced key functions like bookkeeping and compliance. Sales was a specific role that Patz filled internally as trying to do sales full time and winemaking would spread him too thin. For a new, small wine venture it was important to have experienced help behind the efforts while not having the huge overhead of regular employees. Winemaking was the core function Patz handled himself.  Partnering with custom crush facilities, he wanted the Russian River Valley wines made in Sonoma and the Napa Valley wines made in Napa.

“Any winery endeavor requires a number of moving pieces to succeed. The approach I like is to look at parts that I can get help on a consulting basis first. I think this offers the most flexibility as well as strength for a new wine project.,” said Patz.  “I like to work with people I already know. With 35 plus years of winery experience, I’ve met a lot of people along the way.”

From a social media engagement perspective, Patz has evolved his projects and taken a high-touch digital approach to the business.  For a brand like Harlan Estates, they have under 300 followers on Instagram and zero accounts they are following, but for Patz it is a new beginning and a great way to get his three projects exposure. Patz also likes to send out postcards to stay in touch with customers and add that old-school personal touch.

Ultimately from a sales and marketing perspective, by using multiple brands under the same organizational umbrella, Patz markets his wines as independent programs with different grape sources, place identification as well as pricing allowing for diversification and a broadening of his customer base.  The end result is an organic marketing strategy that flows naturally with a touch of attention to detail as the situation calls for.

With regards to Secret Door Winery, Patz pivoted back towards Cabernet Sauvignon after working with it at Flora Springs and Girard Winery. His wife Jung Min Lee was a huge Bordeaux fan, which was a driving force, but also they were the wines Patz became interested in drinking in the 1970s.

“I am probably not the only one who uses the term Neo-Classic Napa Valley– by that I mean- wines that reflect the sensibilities of the wines from the 1960s and 1970s that I recall personally. Specifically with Cabernet Sauvignon, I am not afraid of having some herbaceous character,” noted Patz. 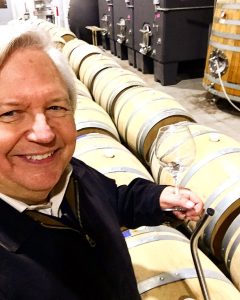 As Patz looks out at the wine industry, he sees younger wine buyers more interested in diversity and quality for price than high wine scores. “I do think that Riesling in some of the select sites are really interesting. I recently began trying more Barbera wines although I am not a big fan of Italian varieties in California, Barbera seems to be very good,” said Patz. “I’d like to see greater links between the wines created in a locale and the restaurants there as well. I think more cooperation there would be really fun and exciting for the consumers.”

To small producers starting out, Patz advises to make your business into something you believe in strongly and to not chase after the momentary fads unless it is something you aspire to.  As the business model and market changes, make sure you have a plan B to keep the business going.  At the end of the day,  it comes down to authenticity as the popular Oscar Wilde quote states.  “Be yourself; everybody else is already taken.”