Adelaida District:  Focusing on the Classic Varieties with an Eye Toward the Future of Paso Robles Wine

Located within the northwestern part of Paso Robles and situated at the southern end of the Santa Lucia Mountains, the Adelaida District AVA has quite a rich agriculture history.  Although the AVA was only recently established in 2014, the region has had grapes planted there going back a century.

The Adelaida District has a very distinctive topography, geology, and climate.  Traveling along the windy roads, cuts of white chalky rocks are unearthed, which is ancient marine sediment from the Mesozoic time period.  Additionally, limestone can be found on the wine trail that is utilized in some of the stone walls surrounding several of the vineyards and wineries.

While Paso Robles at large averages about 10 inches of rainfall a year, Adelaida typically gets three times that amount and in exceptional years has received 45 inches.  The calcium rich soils help with retaining water and providing good drainage. The region also has the highest elevation across Paso Robles reaching heights of 2,200 feet above sea level.  The end result is a diverse variety of wines that maximize not only the quality of the fruit, but the expression of the sites.

As part of this feature, we catch up with three wineries in the Adelaida District who shine the light on the history, uniqueness and ultimately what makes this region a world class wine destination to visit.

The winery has a rich history going back to the early 1970s when Dr. Stanley Hoffman planted some of the region’s first Cabernet Sauvignon. The Hoffman family left Southern California and relocated the family to Paso Robles in order to establish a winery and build a new life for themselves. Hoffman originally established HMR Vineyards and under the tutelage of world renown wine consultant Andre Tchelistcheff,  they were able to create several wines that received international acclaim.

The Adelaida label was created in 1981 with the help of its first winemaker John Munch. Over the next four years, the business continued to grow adding vineyards and expanding their wine operation.  A critical part of that growth was through the hiring of  Jeremy Weintraub in 2012 to oversee winemaking.  Adelaida shifted the brand more into the luxury class by focusing more on quality over quantity, resulting in reductions in grape volume, process shifts in viticulture and in winemaking along with a key emphasis on all vineyards being certified organic. 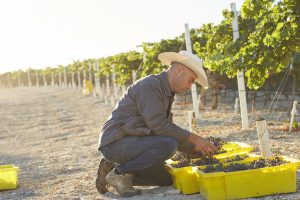 Jeremy’s vision in the cellar is to be as clean as what you would expect or desire in a Michelin-star restaurant kitchen.  Cleanliness allows for more risks with winemaking. His approach is reflected back in the vineyard in a belief that the grapes should make some of the most compelling wines in the world. “I look at the vineyard with an ecological mindset, and I suppose, I look at winemaking as an integral part of creating something that’s important to the human experience,” said Jeremy

The Adelaida Vineyards are planted on limestone at elevations ranging from 1600-1900 feet above sea level. Within their location, they are able to grow Cabernet Sauvignon and Pinot Noir within close proximity to each other.  Jeremy sees it as a key part of overall varietal diversity.

“Just because Pinot Noir and Chardonnay are famous in Burgundy–and Cabernet Sauvignon is famous in Napa– it doesn’t mean that other varietals wouldn’t be better there.  That’s especially true as we see the profound effects of global warming,” said Jeremy. “When we think of great Pinot Noir, for example, the expectation is that it comes from a cool climate. But Santa Maria, Calif., is colder than Dijon [France], and Central Otago [New Zealand] is colder still. Does that make the newer world wines better? Of course not. That’s because what makes a great wine is the site, which encompasses climate and aspect, yes, but also soil, the people, and to a less measurable degree, the intent.”

As Adelaida has evolved over the years, they now work with a wide variety of grapes. While still focusing in on the classics like Cabernet Sauvignon, Pinot Noir, and Chardonnay, they have grown their Rhone varietal program and are incorporating Mourvedre, Picpoul Blanc and Cinsaut into the mix to really showcase the diversity the Adelaida District offers.

After working in the Napa Valley for 20 years, David Parrish returned in 1995 to Paso Robles to plant 40 acres of Cabernet Sauvignon.   At the time Cabernet Sauvignon was starting to gain major traction in the region as demand continued to grow.   For David, his family had a rich legacy of grape growing going back to the 1920s when his grandfather planted over 700 acres of vines. He bought his first vineyard in Creston.  The Adelaida Vineyard was purchased in 2012 and planted two years later.

At 1,550 feet elevation, The Adelaida Vineyard has 30 acres planted and is divided into 16 blocks. “My particular Adelaida site is really incredible because of the calcareous soil that is three feet below the surface. These calcium-rich soils give these Bordeaux varietals their beautiful black fruit color. This color is very pleasing to the eye. It indicates that the wine has a great structure with rounded tannins, a full body, and a great finish,” said David. 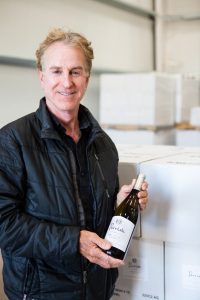 Cabernet Sauvignon remains a critical part of the region’s success. When a customer pours a Parrish Family Winery Cabernet Sauvignon, that person will find it almost blue/black with a unique more pronounced aroma with not only cassis and dark fruit, but also blueberry and blackberry.  Compared to other parts of Paso Robles, an Adelaida Cabernet Sauvignon tends to have a darker color with a higher structure and tannins often resulting in increasing the ageability of the wines.

Parrish also makes a red blend called “The Four Chords.”  The wine came about as David had a young winemaker who loved higher tannin wines– he wanted to challenge him to make a blend that was bigger and bolder. The goal was to use a composition of Cabernet Sauvignon, Cabernet Franc, Malbec and Petit Verdot to make a more full bodied wine that is still very enjoyable.  Hours were spent in their sensory room conducting blending trials to determine what would work. “It’s really funny when you hit the right notes how easy it is to hit the right chord. That is how the Four Chords was made,” said David.

In preserving his grandfather’s legacy, Parrish also makes a Zinfandel. His grandfather Earl Henderson settled in Paso Robles in 1925 to grow grapes.  Although it was during prohibition, grapes were still allowed to be grown.  Wine was still allowed to be produced as long as the final product was below 12% ABV. There were a handful of varieties classified as “Prohibition Grapes” and one of those was Zinfandel.

“In recognition of the hard work my grandfather put in, I have a small block of head-trained Zin, of which we only produce 150 cases a year,” said David. “He picked when the grapes were just ripe so that the fruit came through, but the tannins were not high. Zinfandels made like this are much lighter, brighter and more pleasing to the palate.” 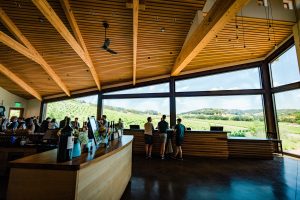 A little over 20 years ago, as Hansjörg Wyss came upon a beautiful property in the heart of Paso Robles , it was love at first sight.  He was completely enamored with the landscape.  He befriended the MacGillivray family who were the previous owners of the Halter Ranch property.  After running tests on the soil and talking with other local vintners in the area, Hansjörg realized there was enough water to sustain a vineyard and purchased the property from the MacGillivrays. He named the 900 acres after his mother Alice Halter. Halter Ranch now sits on 2,700 acres as Hansjörg’s vision is to modernize the estate bringing elements of Swiss design into the buildings while also maintaining the historical charm of the location dating back to the 1800’s.

The property is not only a vineyard, but truly a ranch in that 90% of it is a wildlife sanctuary.  Oak trees are integrated into the ranch with the Ancestor Oak, the world’s largest Coast Live Oak on record at 700 years old situated in the middle of the vineyards. Halter Ranch also utilizes sheep and goats to help maintain the cover crop and throughout the property.  This helps with wild fire prevention as it reduces the brush and creates defensible space.

The ranch also has an airstrip, which dates back to 1967.  In 2021, the Halter Ranch Airport became FAA certified once again. It is now utilized to accommodate guests who can fly in and out of the property. On any given day, you will find about 15 planes on the ranch.  Wine club members can fly in, explore the property, participate in a nice lunch and take several bottles to go on their way out.

What barrels to age the wine ties back to the Halter Ranch Barrel Experiment they host for the Paso Robles winemaking community. They put Cabernet Sauvignon in American, French and Hungarian wine barrels. Halter Ranch then invites local winemakers and cooperage sales representatives to blind taste each of the barrel samples, allowing for local wineries to decide on what barrels to purchase– it also helps bring the community together.

Tying It All Together

For recent Napa transplant and Adelaida Vineyards and Winery general manager Jude Rudeski– he cannot see himself ever moving back. “The Adelaida District is unique in California and the world.  Being somewhat removed from town and the freeway, the pace is more relaxed than other wine tasting regions, and not to sound cliche, a visitor is bound to encounter a proprietor or winemaker on a visit.”

Over the years, the area has had the perception of inferior quality to more established regions, but those tides have changed. Winemakers and marketers not bound by the same rules and traditions of other places have taken advantage of cutting through some of the red tape and crafting beautiful wines that not only are site specific, but experimental and different.

From David Parrish’s viewpoint, “We have great wineries throughout the district that have the passion and heart that will make Adelaida thrive.  We are learning–the wines are getting better and better. To me, Adelaida is perfect and I hope that as more people come to visit it they will start to agree.”

Adelaida Vineyards and Winery 2019 HMR Estate Vineyard Pinot Noir- Sourced from the oldest Pinot Noir vines on the Central Coast.  Translucent ruby red with flavors of raspberry, bing cherry and a touch of spice. A bit of complexity with a nice, smooth finish.

Adelaida Vineyards and Winery 2019 Cabernet Sauvignon- compelling aromatics with flavors of black currant, plum and a touch of chocolate. The limestone soils give the wine structure, nuance followed by a long finish.

Adelaida Vineyards and Winery 2020 Picpoul Blanc- complex aromatics with crisp tropical flavors. Refreshing yet lively acidity along with a nice moderate weight to it.

Halter Ranch 2021 Vermentino- sourced from the chalky limestone soil this wine has flavors of lemon and orange. This crisp Italian variety showcases nice acidity with just the right amount of minerality.